Nightcap with Beyond the Threshold

Where does the idea of Beyond the Threshold come from?
It’s always been in my nature to clearly see when others were being kept from expressing themselves, when their rights were being taken away or violated, even in the most seemingly benign ways. I could never stand for the way our society would act as though certain injustices were normal or natural, and sell them to us as culture or truth.  After doing some extensive research, I realized it wasn’t just that people were uneducated or choosing to be ignorant, but that the entire system we lived in and under was set up to enforce this situation. That was the idea for making my debut short film. I decided not to represent the event itself but describe the situation after in a police station as a symbol of the whole system.

How did you go about developing the three policemen’s characters, and what directions did you give to the actors?
The three policemen construct the triangle of the short film. Three extreme characters, very different, but completing one another. For each, I gave them complex and sometimes contradictory traits as prompts for their performance: one should be funny and make jokes, but deep down he really is indifferent about the work, his family, his life; the next has a rough exterior and sees everything as black and white – there is no grey area for interpretation and empathy. Finally, the youngest character knows that he doesn’t want to be like his superiors but also doesn’t want to become their enemy or disappoint them – yet soon we see in order to do what he believes is the right thing, he would have to do just that. The development of the story takes place through the actions and reactions of three policemen. We see they are all part of a broken system, not that there is just one guilty person; that’s why there isn’t just one main character. 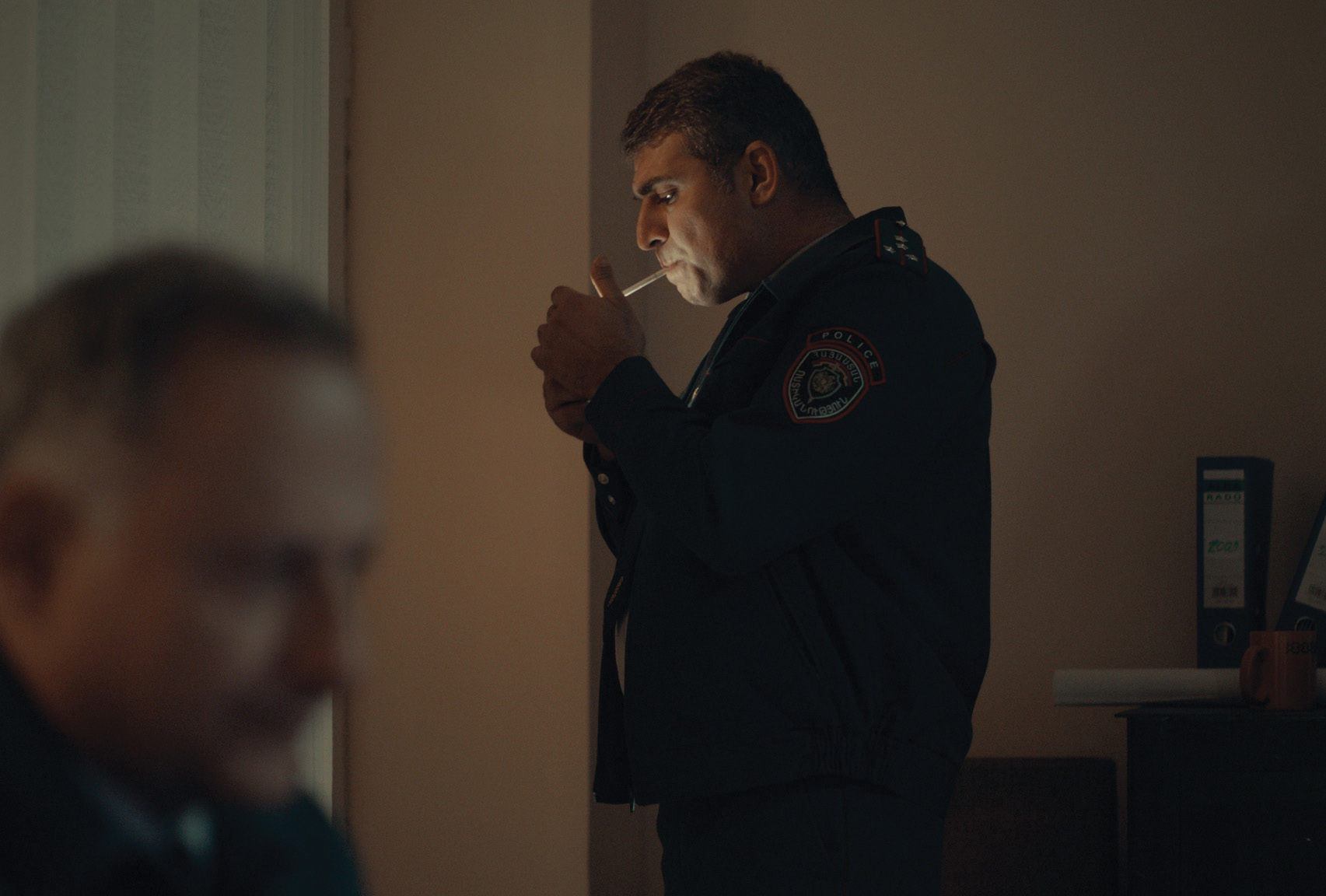 There are subjective camera shots in your film. What effect do you expect such scenes to have on the audience?
That’s right, my camera has moved according to the mood of the situation of the scene. In one point it stands still and petrified and in another place it is tense and uncontrollable. When we enter the point of view of the character in the police station, I want the viewer to feel stressed, confused – that they have entered a world without logic or fixed laws. Like the character whose place we are in, we are searching for safety in this scene and finding it nowhere.

The title Beyond the Threshold suggests the idea of a situation that would have gone outside the limit. Do you think this is how people feel about the violation of women’s rights in 2020?
The title is paradoxical. It depends on which point of view you are surveying the problem: as the one who crosses the threshold, or as the one whose threshold has been violated and there is no longer a space to exist safely. I believe individuals should be willing to cross the threshold towards justice, even if the consequences are painful, in order to change violent and unjust norms. But I also want to say that I don’t believe the film is merely about violence towards women; violence is violence. That violence can begin with the young police officer in the film who feels that he cannot freely express what he believes is right; he also cannot cross the threshold to help someone in need. This is also violence under the systems we live in, and breeds more violence.

Do you find your story promoting a message of hope (since one of the policemen seems to be aware of the seriousness of the issue)? Or a depiction of an endless struggle?
The story is a realistic one. My hope is in the song lyrics at the end, but it depends on the audience too: if they will feel the responsibility to take any steps with the hope of improving the situation, or by neglecting the truth, they will remain in an endless struggle. 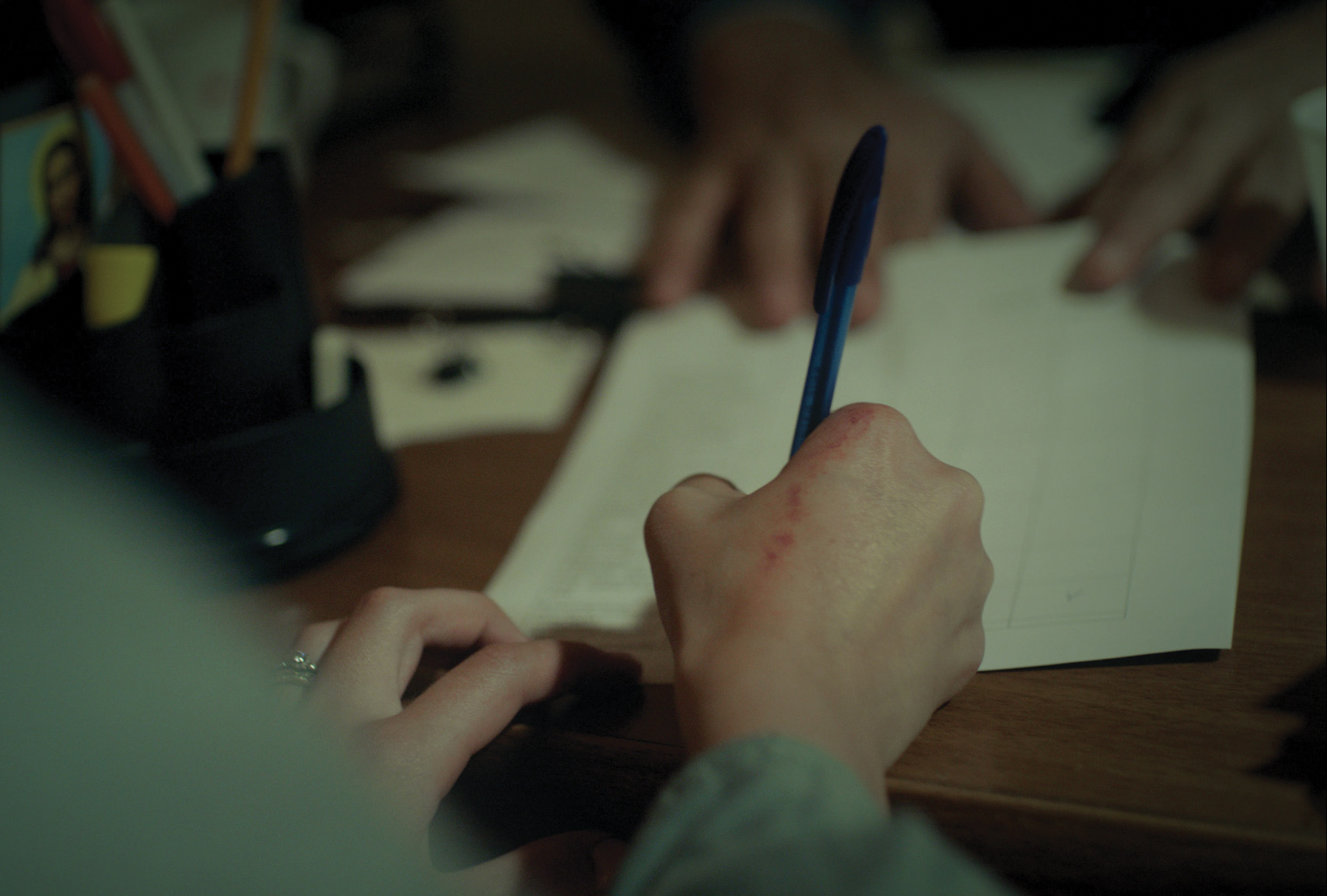 What do you think the future holds for short films?
A very brilliant future is held for short films. In a century where speed is the most important factor of life and the patience of people reduces day by day, but there are so many messages to send, there will always be a unique space for short films.

If we were to go back into lockdown, what cultural delights would you recommend to alleviate our boredom?
Unfortunately, in my country the war began during the same mentioned lockdown and changed the life of everybody. We forgot boredom and realised that the best part of the story had been the lockdown time. So please be thankful and enjoy the emphasis on family life, being together, and doing something together.

Beyond the Threshold is part of International Competition I11.

Networks
Festival Newsletter
Recent posts
Blog
Dernier verre avec Beyond the Threshold (Seuil de tolérance)
Dinner with Empty Places
All partners
Clermont ISFF | Nightcap with Beyond the Threshold | Clermont ISFF
class="post-template-default single single-post postid-38672 single-format-standard samba_theme samba_left_nav samba_left_align samba_responsive thvers_95 wpb-js-composer js-comp-ver-6.7.0 vc_responsive"
We use cookies on our website to give you the most relevant experience by remembering your preferences and repeat visits. By clicking “Accept All”, you consent to the use of ALL the cookies. However, you may visit "Cookie Settings" to provide a controlled consent.
Cookie SettingsAccept All
Gérer le consentement