I met Steven a bit by chance through mutual acquaintances during his first visit to France a few years ago. In the beginning, I didn’t have a clear idea of where I wanted to go with this. It was that “magical” dimension as a medicine man as well as the exoticism of his Lakota roots that interested me. Quite a peculiar exoticism as the film takes place in France and it was Stephen who came to us.

What does the Red Way represent?

It is the spiritual doctrine of the Lakota Indians. The real name is the Sacred Way of the Red Pipe, but practitioners commonly call it the Red Way. It is a collection of approaches and spiritual practices which saw a real resurgence starting in the 1970s as a process of rediscovering one’s identity.

In general, are you interested in the theme of religion and the mysticism that surrounds it?

I have long been interested in shamanic practices from all over the globe. I am fascinated by their ability to bring together groups in the practice of therapy, religion or spectacle, which seems so distant to us here. I’m not interested in religion in itself. It is more the ability of men to create a narrative around group practices that intrigues me.

How long did the filming last and until which point did you have the “right” to film?

The filming was quite quick, two weeks, preceded of course by scouting and investigative work. It was a complicated shoot, due to the reservations of certain participants to be filmed during the ritual, as well as not being allowed to film certain elements of the ritual. It must be known that the core of the Lakota ritual takes place in complete darkness, making any idea of filming it impossible or factitious. 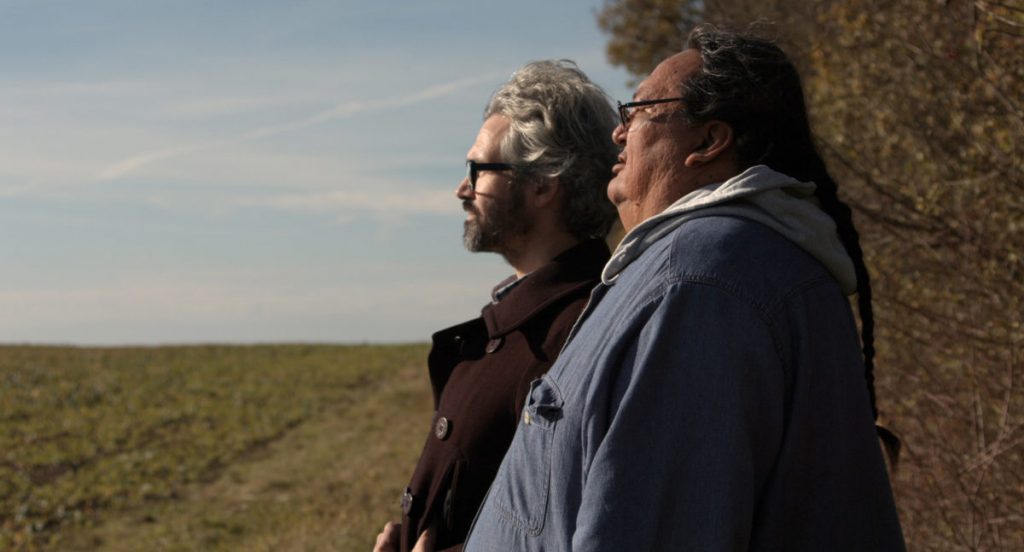 Did you undertake this journey in the hope of experiencing an out-of-this-world adventure?

Like many, I wanted something extraordinary to happen when I first encountered Stephen, but I quickly understood that this was an unrealistic expectation and that the essential was elsewhere. Moreover, as the project unfolded, I realized that it was less my beliefs that were at stake than my perception of the exotic figure that is the Indian.

How real were the scenes in your apartment?

Those scenes are fictional. My daily life is more comfortable than that. But it was meant to show the character’s particular psychic state, a state in which I have found myself in the past.

What importance did you place on your dreams and their interpretation in your daily life before meeting the medicine man? Have you ever had psychotherapy that evoked the interpretation of dreams?

I have many years of psychotherapy behind me, and I feel quite in tune with my dreams. But the Lakota approach to their dreams is much freer than ours and certainly less analytical.

Do you think that to form, groups need adversity or communion? Or both?

We can commune before a common enemy, or a cause that is beyond our ability to handle, or both. But man is a profoundly social animal and he can’t blossom without contact and communion with his fellow man. It’s this need of communion that leads to the existence of religion and all sorts of rituals.

Do you think short film is effective in questioning the meaning of family and of “macro” social units?

I think that cinema, whether it be short or long or medium length, should critically question these themes more often.

La voie rouge was either produced, co-produced or self-financed with French funds. Did you write the film with this “French” aspect in mind: in building the film’s context or in questioning certain notions?

There is no self-financing in La voie rouge. It was made by a group of producers who received financing from the CNC.

As for the “French” aspect, I was interested in the question of exoticism, as I said earlier, so I was only able to make this film set in my own environment, which happens to be France. But I didn’t work with any particular French references in mind and didn’t want to stylize the film in this way. It’s true however that I wanted the scenery that we crossed in the film with Stephen and the places that we visited to reflect an archetypal France, with a central France geography, without any distinctive qualities. An environment that was sufficiently lacking in specific points of reference that it gave viewers the feeling of being familiar with it already. In fact, the film was shot outside of Paris, and the ritual scenes were shot in Anjou.

La voie rouge, was being shown in National Competition F4.