Where did your inspiration for Martin est tombé d’un toit come from?
I imagined the story of Martin est tombé d’un toit after reading an enlightening investigation about construction workers who initiate legal action against their bosses subsequent to work-related accidents. All of the cases had been closed with no further action. In this kind of situation, it is always difficult to separate true from false. Employee, employer, families, friends, colleagues, everyone has his own version of the story and starts to defend things in his own interest. In a professional setting, where forces of domination come into play, justice must decide but there’s always a little something arbitrary and sometimes absurd. It’s precisely this absurdity that I was interested in and I wanted to explore in my film. Martin est tombé d’un toit is constantly trying to highlight the banal weirdness of our daily lives.

What interested you regarding the element of doubt in the couple Martin-Jeanne?
Martin is hiding something throughout the story, but he hides it not only from Jeanne, but from himself. He doesn’t know why he fell, nor if what really happened was that he jumped. He can’t tell Jeanne something about himself that he himself doesn’t yet know. I was interested in exploring things that we don’t know about our own couple and that perhaps we don’t know about ourselves either. 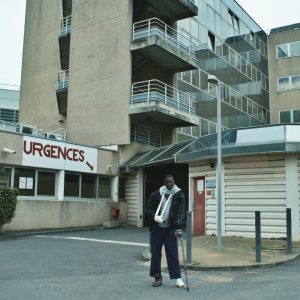 Why didn’t you want to show us their personalities, their relationship with their friends, their choices in music, their hobbies ?
When I wrote the short, I wanted to do an exercise in austerity at several levels, from the script to the directing. In terms of the characters, the idea was to find a certain “transparency” in which the audience could inject more of themselves. The idea was to explore to what extent the unveiling of the story and the characters’ feelings really differ whether they like Black Sabbath or Manu Chao or if, fundamentally, they are not the same. Nonetheless, we know that they like to watch shows about home remodeling and there are some details that indicate they like soccer, but I don’t think that tells us much about them, and that’s the point.

How did you use the length of the sequences and the music to construct the pace of film?
From the onset, I wanted the narrative’s pace to be slow and “clumsy” which would lessen the seriousness but at the same time would project a certain instability.  Nothing goes smoothly in the characters’ lives. For the music, there were two things to keep in mind while composing: first of all, the film is based on absurd humor that’s out of sync with the melodramatic tone in several scenes; and secondly, it’s a French film whose director is Uruguayan. This combination led us to the tango, the quintessential melodramatic dance in Argentina and Uruguay, and not unknown to the French audience. But that this tango also be adapted to modern, dissonant, and unstable aesthetics. 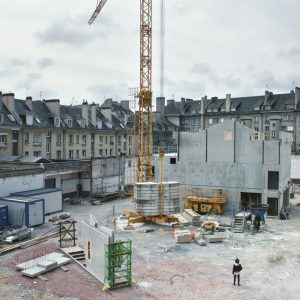 Can we say there’s a “photo-novel effect” in your choice of camera frame and pace? What is your view on these works?
It’s interesting to note that this short film made you think of a photo-novel, a format I didn’t think about consciously when working on this story, but it was one of the first exercises I did as a teenager when I first wanted to tell stories using pictures and of course with La Jetée’s influence. For the image, the frame should be at a certain distance from the characters in order to give a feeling of neutrality, a sort of anti-dramatization with an awkward pace, filled with silences, strange looks. If Martin’s fall is the starting point of my story, then I’m not going to give any particular importance to other problems the couple has. I don’t want their conflicts to be seen as some kind of tragedy but as the pitfalls of daily life. This de-dramatization contributes to the comic tone of the story. By using long still shots, the characters’ faces, and their silences express much more than any dialogue could. So therefore, action and movement are concise and the acting, neutral. Right until the end, the protagonists want to be cryptic and reveal themselves to the spectator only through their actions. 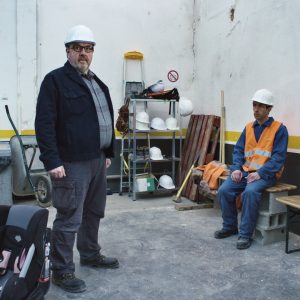 What do you think the future holds for short films?
In a director’s career, the short film is generally understood to be a preliminary step to making a feature length, a sort of training ground. I do not agree with that idea at all. Besides, I made this short after having made my first fictional feature length film. I think that good stories don’t have a given length, which is not a discussion point in literature, for example. The rise in streaming, with all the inconveniences it has versus the cinema, is perhaps an opportunity for short films to create some room for themselves and reach out to the public.

If we were to go back into lockdown, what cultural or artistic delights would you recommend for alleviating our boredom?
I live in Uruguay where, fortunately, the pandemic was less severe than in Europe and where, for the time being, we haven’t had a confinement. But if I had to recommend something to do during these difficult times, I’ve been told there’s a French short film festival that can be viewed online and that there’s a very good selection of national and international films plus a short film about construction workers and their falls which somehow managed to get selected, who knows how.

Martin est tombé d’un toit [Martin fell from a roof] is being shown in the National Competition F1.